Iron & Wine — House By The Sea 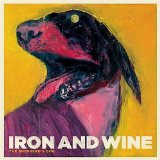 But I've been sparing my neck from their chain
And they've been changing the sound of my name
And I've been swimming to them in my sleep
But I've been dreaming our love and our freedom
Comments (29)add comment
trevc wrote:

That's the music biz for you - all beg, steal and Borrah.
Posted 1 year ago by fredhatman    [ Reply ]
I second that!
This is the best side of eclecticism and why I love RP.  How entrancing, how lovely, how beguiling, how seductive this is.  Thank you, Mr. Bill and whoever was sweet enough to upload to share this.

I think the Calexico colab came shortly before this album.
Sam Beam (I&W) has collaborated with Calexico in the past, so that's not surprising.

My first RP rating at 9 lol. Great mix and production on an interesting groove. Some of Sams lyrics I can get there, and others not yet. Been a fan for a couple years I guess. Cheers ~
Posted 5 years ago by RascalRhyme    [ Reply ]
socalhol wrote:
Thought it might be Calexico at first...

Sam Beam (I&W) has collaborated with Calexico in the past, so that's not surprising.
Posted 6 years ago by xkolibuul    [ Reply ]
Lazarus wrote:
Wow...  this is very very groovy...  excellent guitar work... nice melody...  cool percussion...  love it...

Agreed.
Posted 7 years ago by Krispian    [ Reply ]
KurtfromLaQuinta wrote:
With a little of "Eight Miles High" thrown in for good measure.

Posted 7 years ago by Lazarus    [ Reply ]
That dog gives me the willies.
Posted 8 years ago by sajitjacob    [ Reply ]
socalhol wrote:
Thought it might be Calexico at first...
With a little of "Eight Miles High" thrown in for good measure.

Posted 11 years ago by akmegan    [ Reply ]
Another CD I purchased because of RP. While this isn't my favorite track, even the so-so efforts of this album rate a strong 7.
Posted 12 years ago by rtrudeau    [ Reply ]
Thanks to RP, I'm coming to like Iron & Wine quite a bit. However, this tune didn't do anything for me. 2.