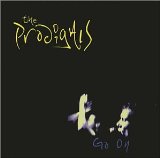 song
album
artist
In the town of Ballybay-hay
There was a maiden dwelling.
I knew her very well
And her story's worth a telling.
And her father kept a still,
And he was a good distiller....
When she took to drink as well
Well the devil couldn't fill her

She had a wooden leg it was hollow down the middle
She used to tie a sting in it and play it like a fiddle
She fiddled in the hall, she fiddled in the alleyway
She didn't give a damn sure she had to fiddle anyway

She had lovers by the score every Tom, Dick and Harry
And she courted night and day but still she wouldn't marry
Then she fell in love with a fellow with a stammer
When he tried to get away, she hit him with a hammer

She led a sheltered life, eating porridge and black pudding.
And she terrorized her man until he died quite sudden.
And when her husband died she was feeling very sorry
She rolled him in a bag and she threw him in a quarry
Comments (0)add comment