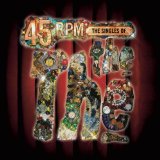 song
album
artist
Beneath the old iron bridges, across the Victorian parks,
& all the frightened people running home before dark,
Past the Saturday morning cinema--
that lies crumbling to the ground,
& the piss stinking shopping centre in the new side of town.
I've come to smell the seasons change, & watch the city,
as the sun goes down again.

This is the land, where nothing changes,
the land of red buses & blue blooded babies,
This is the place, where pensioners are raped,

& the hearts are being cut, from the welfare state,
Let the poor drink the milk, while the rich eat the honey,
Let the bums count their blessings, while they count the money.

So many people, can't express what's on their minds,
Nobody knows them & nobody ever will,
Until their backs are broken & their dreams are stolen,
& they can't get what they want, then they're gonna get angry!
Well it ain't written in the papers, but its written on the walls
The way this country is divided to fall,
So the cranes are moving on the skyline--
Trying to knock down--this town
But the stains on the heartland, can never be removed,
from this country, that's sick, sad, and confused.

The ammunition's being passed, and the lords been praised,
But the wars on the televisions will never be explained,
All the bankers gettin sweaty, beneath their white collars,
As the pound in our pocket, turns into a dollar.