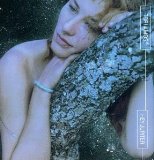 Sometimes I breathe you in
And I know you know
And sometimes you take a swim
Found your writing on my wall
If my heart's soaking wet
Boy, your boots can leave a mess

And I thought you wouldn't have to keep
With me hiding

Hey Jupiter
Nothing's been the same
So are you safe now we're through?
Thought we both could use a friend to run to

That's what I thought, too!

Ditto! I though it was just me!
Posted 8 years ago by salide    [ Reply ]
Everybody in my hotel room loves this song...

Posted 8 years ago by (anonymous)    [ Reply ]
eroz wrote:
Love or hate Tori, there's is no denying she is talented. I never understand the constant comparisons to Kate Bush (another huge talent). Maybe the similarities had some merit in Tori's earlier career, but seriously...I don't see it now.

Just what I've been wondering about, being a huge fan of Kate but not so much of Tori... BUT now I'm in a tight spot, because I've listened to this song again after liking it the first time - and, ha ha, suddenly I hear very well how close her singing alone is *close* to Bush's.
But NOT mimicking/imitating. It just reminds me of Kate.

As for the versions, having checked out the 'acoustic' one, I find them both beautiful... but I like the Dakota better.
Most of the time, the first version of anything musical I hear is the one that will stick.

This song is good for the ears...

She actually does an awesome cover of Purple Rain...sings it every time she visits Minneapolis! :) 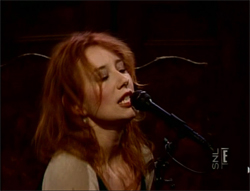 She sang this on SNL. It rocked, but I can't find it on utube.
The UK Hey Jupiter/Professional Widow and the US Hey Jupiter singles feature The Dakota Version of Hey Jupiter, which includes an extra bridge of lyrics as compared to the original album version. The US Bliss single contains a live version of Hey Jupiter, recorded during the Plugged '98 Tour.

"well, i was really in a bind because, um, i was doing some bad things. i was in a love triangle with these, uhh.., i don't know if they were real men now...i'm not...i'm confused about the whole thing! let's see, i was lying in bed...um, strange things happened to you on tour. like strange englishman start sitting at the end of your bed, apparitions of dead guys . and they start singing songs to you. and this guy was definitely dead, and he was definitely singing to me. um, so i'm confused about the copyright laws. i'm not sure if i need to call his ex-wife and give him part of the song or not. but, why should i do that! she's rich...she's not nice. and so, anyway, i kept the copyright, the guys forgot who i was, and the song's mine."
— Tori; VH1 Storytellers

"When we hit Muhammad you realize we've just taken a bend in the road. The first half of the record is about her descent in to the horror; she's got to find another way of looking at herself. On Hey Jupiter, she knows the way she has looked at relationships with men and put them on a pedestal is over. There's a sense of incredible loss because I knew that I would never be able to see the same way again. It's freeing, and there's a sense of grieving with that."
— Tori; Ft Lauderdale Herald, Apr 12, 1996

Hey Jupiter is about the pain of separation that Amos says is very much about a real man. "I was at my lowest. I was at a hotel in Phoenix, and I realized that for once there wasn't a man I could turn to."
— Tori; Spin Magazine, Mar 1996

"Hey Jupiter was especially hard...Iï¿œd made 13 calls from all over the world. I was getting ready to catch a plane from Phoenix to do the Vegas show, and I rang his number again, but no one was picking up. And in that moment, after all the...you know, the fiery redhead behaviour, drawing my lines, making my threats...I was lying there alone, feeling incredibly weak. Feeling like there are not enough sold-out shows, like it doesnï¿œt matter that every American show is sold out, because Iï¿œm only alive when Iï¿œm on a stage with a piano. The rest of the time Iï¿œm just this shell. So, when I wrote Hey Jupiter, it was like, how could we have been so cruel? Because when we started it, there was so much love. Real caring. And I sit here hating someone who I had been head over heels in love with. Taking jets to meet up for four hours and then flying back to do a show the next night.ï¿œ
— Tori; Time Out, Dec 20, 1995

"I have a lot of gay friends who have taught me many things. Because of their experiences, they have taught me how to look at life differently. I want to be very open. I think they have gone through a lot to come out. And I really respect anybody who stands by their truth. I just like communicating with people. And I wanted to communicate with people who I think have taken a very truthful standï¿œin the face of a lot of judgment. Because I wasnï¿œt a part of that world that much. I didnï¿œt see how fierce it could be in this day and age. It shocks me sometimes. And it comes through in my workï¿œlike with Hey Jupiter, Are you gay / are you blue.ï¿œ
— Tori; Aquarian Weekly, Feb 21, 1996

"And the album going into Hey Jupiter and that is the point where she knows itï¿œs over with this particular relationship, or ships, and itï¿œs not ever gonna be what it was again. It is never going back. Thatï¿œs where the whole record turns on its axis. As soon as she knows that, then you do the whole Way Down thing." — Tori; B-Side magazine, May/Jun 1996

Posted 10 years ago by Hippostar    [ Reply ]
Love or hate Tori, there's is no denying she is talented. I never understand the constant comparisons to Kate Bush (another huge talent). Maybe the similarities had some merit in Tori's earlier career, but seriously...I don't see it now.

Posted 10 years ago by eroz    [ Reply ]
FlamingLotus wrote:
When did Kate Bush change her hair color?

I hate you for that (Kate fan)-but I did laugh out loud; good one.

Posted 10 years ago by elliotgoettelman    [ Reply ]
Eh, so-so. I'm just grateful that RP is working. The whole morning I was stressing about why it wasn't playing...figured out it was the 'sound' button on my player. oops.
So glad it's back for my Sunday listening pleasure.