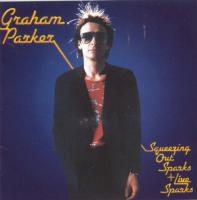 song
album
artist
Her heart is nearly breaking, the earth is nearly quaking
The Tokyo's taxi's braking, it's screaming to a halt
And there's nothing to hold on to when gravity betrays you
And every kiss enslaves you-oo-oo

The GIs only use her, they only ram right through her
Giving an eastern promise, that they could never keep
Seeing a million miles, between their joke and smiles
She heard their hard denials [don't pause]


Why is this rated so low?


yeah, weird.
good quality song.
this stuff is the backbone of RP.
Posted 1 week ago by ace-marc    [ Reply ]
LOVE Graham Parker and this is one of his best

Posted 2 months ago by EffjayUK    [ Reply ]
Having been there as an avid teenage music enthusiast, this sounds SO 1979.  Great lyrics, but super standard music.  Graham Parker never had a major hit, I think, but he probably had a lot of of influence on the direction of rock music.
Posted 4 months ago by cely    [ Reply ]
"I shouted sayonara, it didnt mean goodbye."

Great tune.
Posted 8 months ago by olivertwist    [ Reply ]
I bought the LP on release - lots of good music at that time.

It's a funny old world. Ten years ago I went to Japan, met and married a wonderful lady.

We are living happily ever after.

Posted 8 months ago by radioparadise9    [ Reply ]
ScottFromWyoming wrote:
I saw Graham open for Eric Clapton (!) and as prickly as ever, and knowing full well that EC was credited by the audience for bringing reggae to the masses, Graham told them he'd recorded reggae years before any of them had ever heard of it {4 years after I shot the sheriff, actually} and got booed for the rest of his set. Great show

I had a  curry last night and still I'm 'squeezing out sparks'
Posted 1 year ago by Montyontherun    [ Reply ]
Hugely influential album. This one came out around the same time as This Years Model and I'm The Man. Graham was right up there with Elvis Costello, Nick Lowe and Joe Jackson in the New Wave, Post Punk Singer Songwriter pantheon.
Posted 1 year ago by thewiseking    [ Reply ]
I saw Graham open for Eric Clapton (!) and as prickly as ever, and knowing full well that EC was credited by the audience for bringing reggae to the masses, Graham told them he'd recorded reggae years before any of them had ever heard of it {4 years after I shot the sheriff, actually} and got booed for the rest of his set. Great show


Discovering Japan
Local Girls
Thunder and Rain
Don't Get Excited
Back to Schooldays
Passion Is No Ordinary Word
You Can't Be Too Strong
Love Gets You Twisted
I Want You Back
(The Jackson 5 cover)
Mercury Poisoning
Stick to Me
Crawling From the Wreckage
(Dave Edmunds cover)
Saturday Nite Is Dead
Nobody Hurts You
Soul Shoes
Encore:
Don't Ask Me Questions
Posted 1 year ago by treatment_bound    [ Reply ]

I don't think I know that one. just looked it up on iTunes and listened to a sample. I remember it now! it's from Squeezing Out Sparks. It's been many years since I listen to that vinyl. 8O Holy Moley!! you can download Squeezing Out Sparks+ Live Sparks at iTunes for $9.99. that's 22 songs!! what a bargain! I have to tell DrH about this! :lol: he loves a good iTunes bargain.
Cool, Jrzy,one of my alltime fave artists. I have the Live Sparks set, very good. The setlist is exactly the same as the actual album and it's a good freshener after hearing the actual album a few hundred times.
Posted 15 years ago by zevon    [ Reply ]
Kurt_from_La_Qui wrote:
most excellent Jrzy!!!! i'm going to upload "waiting for the ufo's" in your honor.
awww thanks!!