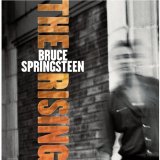 song
album
artist
I hold you in my arms, yeah, that's where it starts
I seek faith in your kiss and comfort in your heart
I taste the seed upon your lips, lay my tongue upon your scars
I look into your eyes and we stand worlds apart

Where the distant oceans sing and rise to the plain
In this dry and troubled country, your beauty remains
Down from the mountain roads where the highway rolls to dark
'Neath Allah's blessed rain, we remain worlds apart

Sometimes the truth just ain't enough or it's too much in times like this
Let's throw the truth away, we'll find it in this kiss
In your skin upon my skin, in the beating of our hearts
May the living let us in before the dead tear us apart

We'll let blood build a bridge over mountains draped in stars
I'll meet you on the ridge between these worlds apart
We've got this moment now to live, then it's all just dust and dark
Let love give what it gives, let's let love give what it gives
Comments (154)add comment
Wow, interesting.  I would have never guessed in a million years it was him until 45 seconds in.
Posted 5 days ago by khardog145    [ Reply ]
Solid stuff from the Boss off an important album.
Posted 1 month ago by SchoepTone    [ Reply ]
Decent CD version, much better live with 20,000.
Posted 1 month ago by NEOvManhattan    [ Reply ]

My thought exactly...
Posted 4 years ago by Michael_Dean    [ Reply ]
subgyro wrote:
Before actually looking, I would've SWORN this was Oysterband.

Sounded like Bruce Cockburn when I first heard it.
Posted 4 years ago by MargoMallen    [ Reply ]
Before actually looking, I would've SWORN this was Oysterband.
Posted 5 years ago by subgyro    [ Reply ]
lasker98 wrote:
Warren Zevon on a bad day?

Ha! that is really close. I have to say I like this but yeah, now it's always gonna be Warren having a bad day.
Posted 5 years ago by oldsaxon    [ Reply ]
djblitz wrote:
Not nearly one of Bruce's best but are ANY of his songs ever less than like a 6 or 7?

Yes, yes there are many.
Posted 5 years ago by countyman    [ Reply ]
Bruce & Qawwali? gotta have some kahunas to put such a rough voice against a master like that. kudos for the guts, but really makes him sound bad. sucks the soul out of the sufis.
Posted 6 years ago by RabbitEars    [ Reply ]
An incredible song when heard live in person with the huge and powerful E Street Orchestra.

Can't help but think of Warren Zevon when I hear this song.

I don't understand how that happens, but I've noticed it several times on RP.  I'm listening to a song I know WELL from an album I've listened to for YEARS, and the tempo seems different, or it's not mixed the same way..  something.
Posted 7 years ago by eswiley2    [ Reply ]
Top stuff and good to hear it again!