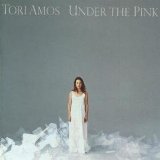 And Greg he writes letters
And burns his CDs
They say you were something
In those formative years
Well, hold onto nothing
As fast as you can
Well, still pretty good year
Pretty good

Maybe a bright sandy beach
Is going to bring you back, back, back
Maybe not so now you're off
You're going to see America
Well, let me tell you something about America
Pretty good year
Pretty good

And Greg he writes letters
With his birthday pen
Sometimes he's aware
That they're drawing him in
Lucy was pretty
Your best friend agreed
Well, still pretty good year
Pretty good
Pretty good year
Comments (32)add comment
The Ludovico was so overwrought I thought, "what could be more ham handed treacly than this?" and then I had my answer.

That loud bit in the center is identical to some of the stuff Reznor does with NIN and every time I think that no matter how good they are, an outburst like that is just amateur.
Posted 3 years ago by Steely_D    [ Reply ]
rdo wrote:
Sometimes I hate Tori...sometimes I love Tori...right now, I love her!

Interesting. I'm of the other opinion. Definitely not my favorite.
Posted 5 years ago by stalfnzo    [ Reply ]
ckcotton wrote:
Well I can't argue with the man behind the curtain

Then you should simply say that in the first place.

At any rate, I find all statements about songs being played too frequently on RP to be utterly ridiculous.
Posted 7 years ago by xkolibuul    [ Reply ]
Sometimes I hate Tori...sometimes I love Tori...right now, I love her!

Huh?  Once a month is more like it, no more than 4 times a year in any given 8-hour block of time.
Well I can't argue with the man behind the curtain

Thanks, Bill, for providing a soundtrack to a pretty good year!

Posted 10 years ago by Mandible    [ Reply ]
One of the best albums in the history on mankind.

Posted 10 years ago by splooge    [ Reply ]
I'm just not in the mood to be yelled at this Friday. I thought I'd put up some older work.

I drew this portrait of Tori Amos the summer after I graduated from high school.This was a birthday present for my older cousin,Kristen,who's always been like a sister to me.She plays the piano,and love,love,love,love,loves Tori.....but isn't that the way it always is with Tori Amos fans,Tori Amos fans are usually quite dedicated.Her birthday wasn't until December....I got too excited,and I gave it to her in August.

"Whether it bums you out or not, the truth is, all this happened, as much as the first record did. But there are other characters involved a bit more. There are just other beings involved in this one. Like Pretty Good Year, for example, I got a letter from a guy named Greg in England. This one got to me - it missed getting to me for, like, three months. But it just got passed around to different people, and finally somebody just - I was walking through the record label in between the tour up in England, and somebody put it in my bag. They just said, "You know what, Tori? This has been sitting around here. Just take it." And I took this letter, and I opened my bag two days later, and I read it. It was a picture of - he had drawn himself. It was a pencil drawing. Greg has kind of scrawny hair and glasses, and he's very skinny and he held this great big flower. Greg is 23, lives in the north of England, and his life is over, in his mind. I found this a reoccurrence in every country that I went. In that early 20 age, with so many of the guys - more than the girls, they were a bit more, 'Ah, things are just beginning to happen.' The guys, it was finished. The best parts of their life were done. The tragedy of that for me, just seeing that over and over again, got to me so much that I wrote Pretty Good Year. You don't really know what my role is. Am I Lucy, or am I that eight bars of grunge that comes out near the end where I express, and then nothing, everything else is Greg's story? I found that kind of really fun. The emotion is coming from somebody else's story. And yet it touched me so that I could sing it."

"So this boy wrote me a letter. He's from the north of England. It's not, you know, one of them, it's not.. I guess I could tell you some letters that would like curl your toes and stuff. This is not one of those letters. But this letter inspired this next song. And he's from not quite Scotland, but in the north and it's where the working people live. Most people work their father's mine and stuff. They have a harder life than people in the south and then they kind of hate them. And anyway, it says, 'Dear Tori, my life sucks.' And he drew me this picture of himself - he's like an emaciated grunger with glasses and the drooping hair and drooping flower. He drew me a drooping flower...anyway, he's twenty. And he goes, 'look. ya know, I don't know what you girls expect of us. i mean, i can't figure it out. you know, first you want us to be a provider and then once we do that, we've gotta take like art classes on Thursday nights. and then you like, you gotta cum four times first. and then we have to like have the kiche in the oven, you know. and I don't know what you want!' and I was like, 'guys, I know it's really rough, but no pity."
— Tori intro to song; Seattle WA 3/20/94, Rhapsody in Pink bootleg

"...in New Mexico, where I went to write, and record, this album, was that at one point I was spraying Pledge polish in a cupboard and I inhaled it and I got a lung infection which meant I couldn't speak, or sing, for three weeks. And I really thought my voice was damaged forever and had to do voice lessons on the phone, with this voice teacher to try and get the natural corisone back on the cords. I was thinking 'what if I never sing again?' Then I'd say 'if I can't sing what's the point in being alive, is this person worth anything at all?' And there were moments where the only answer to that question was 'no'. Then i'd give in to the self-pity that comes out in the song Pretty Good Year, and in the lyric 'They say you were something in those formative years'.
— Tori; Hot Press, January 1994

"mountain biking became a major event in my life for a week, the mud was so thick on the tires we got there just in time to feel the mountain thaw, the sound when these two merged was something like 'thclulpleekooh' i said on an intake of breath with no lips moving and no throat usage, i like this word and i liked the idea of the eternal footman saying 'asta' on a mountain bike"
— Tori; Under The Pink Songbook

Posted 10 years ago by Mandible    [ Reply ]
Under the pink and two in the stink!

Posted 10 years ago by bigfootmonty    [ Reply ]
MiataDJ wrote:
You could make this an all Tori station for all I care...she's amazing (and DAMN sexy!)...

Well, I like some of her songs and don't really have strong dislikes. But an all Tori Station

Posted 10 years ago by ambrebalte    [ Reply ]
MiataDJ wrote:
You could make this an all Tori station for all I care...she's amazing (and DAMN sexy!)...

Oh great, this is the only station that will go through my works firewall, you gonna take that away from me and leave me with no music!