Jethro Tull — Minstrel in the Gallery 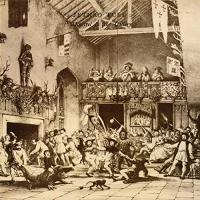 On the parts they never mention
He pacified the nappy-suffering, infant-bleating
One-line jokers, T.V. documentary makers
Overfed and undertakers


The minstrel in the gallery
Looked down upon the smiling faces
He met the gazes, observed the spaces
In-between the old men's cackle

Then he brewed a song of love and hatred
Oblique suggestions, and he waited
He polarised the pumpkin-eaters
Static-humming panel-beaters

The minstrel in the gallery
Looked down on the rabbit-run
Then he threw away his looking-glass
Saw his face in everyone
(Hey!)
He titillated men of action
Belly warming, hands still rubbing
On the parts they never mention
Salaried and collar-scrubbing
(Yeah)

The minstrel in the gallery
Looked down on the rabbit-run
Then he threw away his looking-glass
And saw his face in everyone
(Hey!)

A is for as I walked out, as all good songs begin.
B is for Brave Boys, the bit the audience joins in.
C is for the cabin boy who turns out not to be male,
And D is for the drummer who is very often female.
E is for ethnic stance with hand round mug of beer.
F is for the finger wot you sticks into your ear.
G is for the garter which often comes undone,
And H is for the hay where you untie it which is fun.
I is for the Irish rascal who already has a wife.
J is for John Barleycorn who keeps coming back to life.
K is for the k-nave who took a k-nife and killed his sister
... and mother, and father, seven brothers and assortment of male servants, his horse,   his hawk, his greyhound, his ferrets, himself, all in 47 verses and assortment of keys.
L is where he's going, for to bake and burn and blister.
M is the merry month of May when youthful blood springs hot.
N is nine months later when you wish that it had not.
O is for "O no John no John no I don't approve,
Of P the perky way in which I saw your trousers move.
Q is found at festivals outside the ladies' loo.
R is for real ale, me boys, responsible for Q.
S is the sporran of the bonnie heilan laddie.
T is wild mountain thyme, gings a treat with finnan haddie.
U is unaccompanied song of very great appraisal.
V is for the vowel sounds which should preferably be nasal.
W is for the wife who takes tumble with the groom.
X is what her husband says on entering the room.
Y is you good people, I hope you've not been bored.
Z is for the zeal, with which I hope you might applaud!
Posted 7 months ago by kbs    [ Reply ]
Not their best song.
Posted 7 months ago by Edweirdo    [ Reply ]
ziakut wrote:

Brilliant rock! Tull in a class all by itself. Never matched, never duplicated. Intricate, sophisticated and raucous!

I never really got into Tull, I think just a few songs were really overplayed. This is my first time hearing this, and it's amazing.  Bill knows how to tease out the deep cuts.
c.
Posted 7 months ago by cc_rider    [ Reply ]
Brilliant rock! Tull in a class all by itself. Never matched, never duplicated. Intricate, sophisticated and raucous!
Posted 7 months ago by ziakut    [ Reply ]
Still a totally tough song.
Posted 8 months ago by Segue    [ Reply ]
a great video to watch with Jeffrey hammond!
Posted 11 months ago by Pwb6769    [ Reply ]
whoa hold on,
Lets not not get carried away by 60&70's hippy nostalgia.
This get dusted off and played to remind of us of what a weird bunch the Tull were.
Put it back in the sleeve, lock up in lead lined box and throw in a deep well.
Posted 1 year ago by Stetsonman    [ Reply ]
Most Brilliant tune... Seen Tull live at least 5 times... Never Disappointed... Fuckingrooving!
Posted 1 year ago by deadheadmark    [ Reply ]
oppositelock wrote:

14 years since this has been played?  Time to put it back in the rotation.

Your time has arrived.

Greeetins from Bavaria to all the listeners outside. Stay safe
Posted 1 year ago by ger-man    [ Reply ]
I was a huge Tull fan back in the day, saw them 3 times between 1969 and 73 and had all the albums. Unfortunately don't think they've held up as well over the years as some of their peers. Gave it an 8 for old times sake.
Posted 1 year ago by ImaOldman    [ Reply ]
Now this is Jethro Tull! Excellent choice.

.  tried but I just can't stomach the Tull.  Thanks for the taste though Bill.
Posted 2 years ago by sjmorrison2    [ Reply ]
moodfood wrote:

Seem to be on a Tull binge lately.  I hope it ends soon.  Let's move on.

Really, you're much too kind. I don't know if I could survive a steel-cage Death Match with this bombastity.
Posted 5 years ago by kcar    [ Reply ]

"8" for the riff & changes, and "10" for Barrie Barlow's drumming.
Posted 6 years ago by LowPhreak    [ Reply ]
Wow.  This song is long.  I didn't know djs needed to play bathroom break songs anymore.
Posted 7 years ago by caatgrrrl    [ Reply ]
Minstrel in the Gallery... OK, middling Tull, but the song has really grown on me over the years. Saw Ian Anderson's Thick as a Brick 1 & 2 tour here in Tokyo last spring and was in awe of the music, musicianship, and the performance. Seems that Jethro Tull is not in the Rock'n'Roll Hall of Fame, even after all these years. I'm not sure how much it really matters (and Ian Anderson May well not care), but it seems a glaring oversight.
Posted 7 years ago by obliocactus    [ Reply ]
Last played 2002!  Let's knock the dust of this one!
Posted 9 years ago by oppositelock    [ Reply ]
One of my faves, a textbook example of Tull switching back and forth between folky acoustic and blistering electric guitars. The next song on the original album, Winds of Valhalla, succeeds at the same theme.
Posted 19 years ago by rjs    [ Reply ]
Originally Posted by markmreadr: By the time he recorded this song, Ian Anderson's ego had swollen well beyond normal human dimensions. While not as bad as some of the other tripe he recorded in these years, this song epitomizes everything that is wrong with later Tull.
What he said. (But earlier Tull is always welcome.)
Posted 19 years ago by Lee    [ Reply ]
Whoa - this one brings me way back. Thanks for the trip down memory lane!
Posted 19 years ago by MissJenn    [ Reply ]