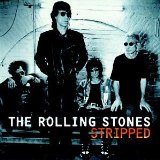 I don't quite "lubs" it but it gets a high 9 in these old ears!!!
Posted 6 years ago by Andy_B    [ Reply ]
websbestcomics wrote:
Everyone here is forgetting that unlike the legendary bands such as The Beatles or Doors, The Stones are still active and making new music (whether you like it or not). My point is that it's difficult to determine if the newer material will stand on it's own in 30 or 40 years. It's also difficult to view The Stones careers objectively because we don't have that luxury of hindsight yet. I suspect that in 15 years, when The Rolling Stones will have obviously retired and likely will be dead, some of these cynical 'age-ism' perceptions might seem less relevant in comparison to their entire body of work. They are still quite creative, and most of their recent material, IMO, is not contrived at all, but genuine attempts to produce meaningful sounds. Whether you agree with that or not doesn't matter; what matters is that these guys still think the work is important and clearly are physically capable of producing it at the same level of energy and enthusiasm. I don't think any of their post-Steel Wheels material was 'phoned-in'. Love it or hate it, but why be so cynical about it? Remember, Mick and Keith haven't needed to record since at least 1989, since the Steel Wheels tour set them all into kazillionaire status. The other band members don't even make much money from album sales. It's the tours that rakes in the real money for all of them, and they could easily have toured for the last 20 years as a greatest hits package. But they didn't. Honestly, the people that think the Stones are ridiculous are just unable to tear themselves away from the music they made earlier on. It's almost 2008, get over the 60's and 70's, please. The Stones have.
Bravo!  Well said.
Posted 6 years ago by h8rhater    [ Reply ]
I lubs this song. 10
Posted 6 years ago by sirdroseph    [ Reply ]
One of my fav songs from this band! Exellent album btw.
Posted 6 years ago by helgigermany    [ Reply ]
iloveradio wrote:
The sax (Bobby Keys) and the piano playing are wonderful.