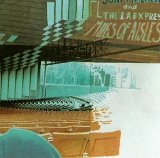 song
album
artist
There's a man who's been out sailing,
In a decade full of dreams.
And he takes her to a schooner,
And he treats her like a queen.
Bearing beads from California,
With their amber stones and green.
He has called her from the harbor,
He has kissed her with his freedom,
He has heard her off to starboard
In the breaking and the breathing of the water weeds.

While she was busy being free.

There's a man who's climbed a mountain,
And he's calling out her name,
And he hopes her heart can hear,
3,000 miles he calls again,
He can think her there beside him,
He can miss her just the same.
He has missed her in the forest,
While he showed her all the flowers,
And the branches sang the chorus,
As he climbed the scaly towers of a forest tree.

While she was somewhere being free.

There's a man who sent a letter and he's waiting for her reply.
He has asked her of her travels since the day they said goodbye.
He writes, "Wish you were beside me, we could make it if we try."
He has seen her at the office, with her name on all his papers,
Through the sharing of the profits,
He will find it hard to shake her from these memories.

And she's so busy being free.

And she's so busy being free.

There's a man who sends her medals,
He is bleeding from the war.
There's a jouster and a jester and a man who owns a store.
There's a drummer, and a dreamer,
And you know there may be more .
She will love them when she sees them,
They will lose her if they follow.
And she only means to please them,
And her heart is full and hollow like a cactus tree.

While she's so busy being free.