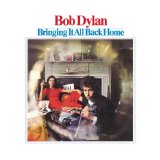 song
album
artist
I was riding on the Mayflower when I thought I spied some land
I yelled for Captain Arab I have you understand
Who came running to the deck, said, "Boys, forget the whale
We're going over yonder, cut the engines, change the sail
Haul on the bowline," we sang that melody
Like all tough sailors do when they're far away at sea

"I think I'll call it America," I said as we hit land
I took a deep breath, I fell down, I could not stand
Captain Arab, he started writing up some deeds
He said, "Let's set up a fort and start buying the place with beads"
Just then this cop comes down the street, crazy as a loon
He throws us all in jail for carryin' harpoons

Ah, me, I busted out, don't even ask me how
I went to get some help, I walked by a Guernsey cow
Who directed me down to the Bowery slums
Where people carried signs around, saying, "Ban the bums"
I jumped right into line saying, "I hope that I'm not late"
When I realized I hadn't eaten for five days straight

I went into a restaurant, lookin' for the cook
I told them I was the editor of a famous etiquette book
The waitress he was handsome, he wore a powder blue cape
I ordered some suzette, I said, "Could you please make that crepe?"
Just then the whole kitchen exploded from boilin' fat
Food was flying everywhere, I left without my hat

Now, I didn't mean to be nosy, but I went into a bank
To get some bail for Arab and all the boys back in the tank
They asked me for some collateral, and I pulled down my pants
They threw me in the alley when up comes this girl from France
Who invited me to her house. I went, but she had a friend
Who knocked me out and robbed my boots and I was on the street again

Well, I rapped upon a house with the U.S. flag upon display
I said, "Could you help me out? I got some friends down the way"
The man says, "Get out of here, I'll tear you limb from limb"
I said, "You know they refused Jesus, too." He said, "You're not Him
Get out of here before I break your bones, I ain't your pop"
I decided to have him arrested and I went looking for a cop

I ran right outside, I hopped inside a cab
I went out the other door, this Englishman said, "Fab"
As he saw me leap a hot dog stand and a chariot that stood
Parked across from a building advertising brotherhood
I ran right through the front door like a hobo sailor does
But it was just a funeral parlor, and the man asked me who I was

I repeated that my friends were all in jail, with a sigh
He gave me his card, he said, "Call me if they die"
I shook his hand and said goodbye, ran out to the street
When a bowling ball came down the road and knocked me off my feet
A pay phone was ringing and it just about blew my mind
When I picked it up and said hello, this foot came through the line

Well, by this time I was fed up at tryin' to make a stab
At bringin' back any help for my friends and Captain Arab
I decided to flip a coin like either heads or tails
Would let me know if I should go back to ship or back to jail
So I hocked my sailor suit and I got a coin to flip
It came up tails, it rhymed with sails, so I made it back to the ship

Well, I got back and took the parkin' ticket off the mast
I was ripping it to shreds when this Coast Guard boat went past
They asked me my name and I said, "Captain Kidd"
They believed me but they wanted to know what exactly that I did
I said for the Pope of Eruke I was employed
They let me go right away, they were very paranoid

Well, the last I heard of Arab, he was stuck on a whale
That was married to the deputy sheriff of the jail
But the funniest thing was when I was leavin' the bay
I saw three ships a-sailin', they were all heading my way
I asked the captain what his name was and how come he didn't drive a truck
He said his name was Columbus. I just said, "Good luck"
Comments (17)add comment
I think Ray Wylie Hubbard had Dylan's hoot in mind.

Song: Conversation with the Devil
Artist: Ray Wylie Hubbard
Album: Crusades of the Restless Knights
Posted 1 month ago by kingart    [ Reply ]
One Dylan's most fun and witty songs. Always a gas to hear.

Just then this cop comes down the street, crazy as a loon
He throws us all in jail for carryin' harpoons
Posted 6 years ago by kingart    [ Reply ]

Personally, I think this is just an acid trip's narrative and nothing more.  If you are gleaning some deep sociological message out of this, I suggest you're missing Mr. Dylan's point here: life is an adventure, so get on with it.

By the way, it was NOT played today.  Last comment is from 2005.  I just wanted to see if this was in the All-Encompassing Catalog, and, of course, it is.