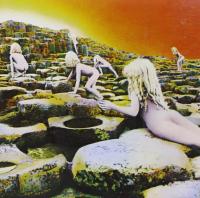 song
album
artist
(no lyrics available)
Comments (121)add comment
There aren't many songs that can move me so deeply, like if it was in resonance with the entire universe vibration...or only my soul
Posted 2 weeks ago by Surfeurseb    [ Reply ]
Tang2 wrote: Mother Nature throws incredible lasers onto the Giants Causeway where that album cover was shot!
A place to add to your bucket list and take in. If only I could afford to go back again, so much more to see there.


Thank you Tang2 for sharing.

It brought me to the interesting story below about the history of the album cover art.

HOUSES OF THE HOLY: THE BACKSTORY TO THE FAMOUS LED ZEPPELIN ALBUM COVER

One of the most iconic record covers of the 1970s is Led Zeppelin’s fifth album, 1973’s Houses of the Holy and it’s also one of the most mysterious. Fans have long speculated about the “meaning” of this cryptic image of naked, golden-haired children crawling around an apocalyptic landscape towards… what? Was it a reference to the creepy 50s sci-fi film Village of the Damned? An apocalypse cult? Or was there some “occult significance” to Jimmy Page? I’m sure there must have been quite a lot of stoned, meandering conversations back then about this one.

The cover, produced by the legendary London-based design firm, Hipgnosis, was shot on the Giant’s Causeway in Northern Ireland. Aubrey Powell, the Hipgnosis partner who actually designed the cover, told Q magazine in 2003 that the concept was based on Arthur C. Clarke’s novel Childhood’s End, where hundreds of millions of Earth’s children gather together to be taken off into space.

But there’s an odd factoid or two about the Houses of the Holy album cover that might surprise you: First off, it was not a small army of naked children with wigs on, it was only two kids, a brother and sister, who were photographed over the course of ten days at dawn and at dusk. One of them went on to become a world famous TV presenter, Stefan Gates, of the BBC’s popular Cooking in the Danger Zone show.

Gates said of the shoot, which he did at the age of five with his older sister Samantha:

“We only got a few quid for the modelling and the chance to travel to places we had never been before. Our family wasn’t well off, we certainly couldn’t afford holidays, so it worked out great for us.

“For the Zeppelin cover we went to Ireland during the Troubles. I remember arriving at the airport and seeing all these people with guns. We stayed in this little guest house near the Giant’s Causeway and to capture the so-called magic light of dawn and dusk we’d shoot first thing in the morning and at night.

I’ve heard people saying they put wigs on several children. But there was only me and my sister and that’s our real hair. I used to love being naked when I was that age so I didn’t mind. I’d whip off my clothes at the drop of a hat and run around having a great time, so I was in my element. My sister was older so she was probably a bit more self-conscious.”

“It promptly rained for ten days straight. I shot the whole thing in black and white on a totally miserable morning pouring with rain. Originally, I’d intended the children to be gold and silver. Because I shot in black and white and it was a gray day, the children turned out very white. So when we hand-tinted it, the airbrush artist, by accident, put a kind of purple tinge onto them. When I first saw it, I said, ‘Oh, my God.’ Then we looked at it, and I said, ‘Hang on a minute, this has an otherworldly quality.’ So we left it as it was. Everybody was so cold, and so freaked out because it wasn’t working, that the only thing I could keep everybody together with was a bottle of Mandrax and a lot of whiskey.”

Oddly, in 2007 Stefan Gates claimed to have never listened to the album and that he felt there was something perhaps sinister about the cover image. “It carries too much significance for me,” he said at the time. “A part of me wants to go out to the Giant’s Causeway with a big pair of speakers, strip naked and play it just to see if I have some kind of great epiphany.”

“I remember the shoot really clearly, mainly because it was freezing cold and rained the whole time.

“We were naked in a lot of the modelling shoots we did, nothing was thought of it back then. You probably couldn’t get away with that now.”

Stefan Gates believes shooting the album at the age of five has a huge, but mostly subconscious, role in his life. “Although it’s just my naked behind you can see, perhaps being a part of something like that at a young age made me seek out more ambitious and adventurous experiences.” 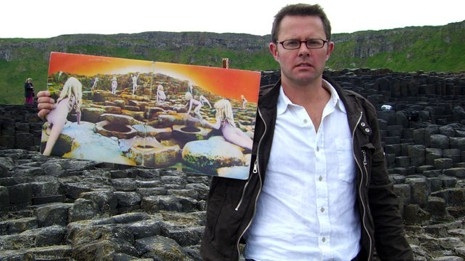 Above, Stefan Gates holds the famous album cover at the site of the Giant’s Causeway in Nothern Ireland. Below, the image from the gatefold of the Houses of the Holy sleeve, shot at Dunluce Castle.

The February 2010 BBC 4 radio show Stefan Gates’s Cover Story saw him return to the Giant’s Causeway to experience the album there for the first time, played on a boom box (but presumably clothed).

Posted 2 months ago by justin4kick    [ Reply ]
Hadn't listened to this is so long, for some reason Bonham's drumming stood out in the mix just a little today, he was incredible!
Posted 4 months ago by mrsquid    [ Reply ]
who in the hell voted this a 1? bots? glad I don't know them.

Posted 5 months ago by lynn01    [ Reply ]
The thing of it is with this band and only a few others, is that they tried to make every song, special. Unique. Every song is crafted.

They never mailed it in.
Posted 7 months ago by idiot_wind    [ Reply ]
How come I didn't get this quality of sound back on the original LP?  I was the original Zep and Rush head in the day. Thank you Radio Paradise.
Posted 2 years ago by Salamus    [ Reply ]
Tang2 wrote:

Mother Nature throws incredible lasers onto the Giants Causeway where that album cover was shot!
A place to add to your bucket list and take in. If only I could afford to go back again, so much more to see there.


Visiting Ireland next summer! Thanks for the beautiful picture :)
Posted 2 years ago by Syrupwaffle    [ Reply ]

other Nature throws incredible lasers onto the Giants Causeway where that album cover was shot!
A place to add to your bucket list and take in. If only I could afford to go back again, so much more to see there.
Posted 3 years ago by Tang2    [ Reply ]
First time I saw lasers used in a rock concert was during this song on the '75 Physical Graffiti tour.
Posted 3 years ago by On_The_Beach    [ Reply ]

After graduation in 1981 I used my first pay check to lay down a deposit on a pair of KEF Cantor II speakers. Almost 40 years later I still use them virtually every day. Vinyl, Tape, MinDisk & CD have all come and gone but these amazing speakers are still with me. Best investment I ever made!

DAMN!  those make my Polk T50s seem like bookshelf speakers in comparison, although the Polks' 6.5" woofer is just short of the "shit, the neighbors called a noise complaint again?" level.

This song is the definition of 10/10, full body goosebumps and a strong desire for more amplification are guaranteed!
Posted 3 years ago by qwarx    [ Reply ]
stunix wrote:
10, it'd be rude not to.   truly epic piece of music.

I believe I heard them here in Brooklyn. My neighbors complained, they thought it was me.

Well. That was a certain inspiration for the guys in the Porcupine Tree.
They even grabbed the intro. =)

Yeah, I remember seeing that "fog" at the Pink Floyd show I went to back in the day, also.

Posted 13 years ago by Danimal174    [ Reply ]
The POT is certainly HOT..They do a great job covering this one..the digital recording equip gives it a new life keller1 wrote:
On the whole Tool/Zep thing:

Tool's cover is cool but for me the Zep version is the winner —- even Danny Caray's admittedly virtuoso drumming can't compare to Bonzo in this old diehard's mind.

That said, I wonder too why there's no Tool on RP's playlist —- "Schism" or "The Pot" would be good places to start. Maybe I'll upload em —- if they got added they would be a welcome antidote to Radiohead and Cake.

Posted 13 years ago by 1wolfy    [ Reply ]
Deadwing wrote:
Granted Tool is a great band but they are no LZ. They simply don't have the range that Zep had. I have 4 Tool albums and I enjoy their music but about 60% of their songs sound nearly identical (The One Trick Pony syndrome). It sounds cool but they just don't have the dynamics that Zep had. I can see Tool doing something similar to Achilles Last Stand or Immigrant Song but they could never write Going To California or The Rain Song. Tool is having a huge impact on modern music but they aren't in Zep's league. Sorry but it's true. Flame away!

Tool does a great live version of this song.