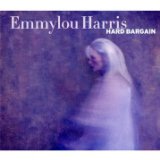 Posted 9 years ago by creekgirl    [ Reply ]
beautiful
Posted 9 years ago by arserocket    [ Reply ]
Feghoot wrote:
She really is a beautiful non talent.  With out her looks and connections you'd never hear her.
Uh, no. Her "connections" stem directly from her talent, which is huge. She may not be to your taste, but that hardly makes her a "non talent".
Posted 9 years ago by BillG    [ Reply ]
Never heard this before, or anything from her new album for that matter. But i could instantly hear this would have to be some of her later work. Her voice really aged over the years, in a good way, but you can clearly hear the difference between the young Emmylou and the Emmylou now...